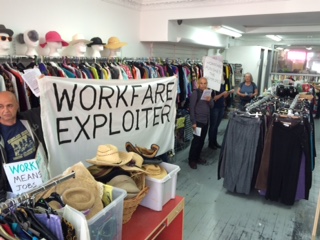 Last Sunday, 7th June 2015, about 10 of us met at North London Hospice in Turnpike Lane, to picket the shop in our ongoing campaign against Workfare and Community Work Placements – the use of unpaid and forced labour (see Boycott Workfare web site). We fully support the work North London Hospice are doing, but are trying to persuade them not to replace genuine volunteers with people on benefits who risk loosing benefits through sanctions if they do not put in 30 hours unpaid labour a week at their shops. (For more info, see our article ‘Why North London Hospice should keep its word and pull out of workfare‘).

To increase the pressure on NLH, as well as our usual picket outside the shop, this Sunday, 6 of us also went into the shop with a banner and leaflets, to inform customers of the campaign to keep volunteering voluntary. Others talked to people who were coming in to shop, most of whom changed their mind after a brief chat.

The manager asked us to leave, saying we could not demonstrate inside the shop, only outside. When we stood firm she said she would call the police. Meanwhile we chatted to the guy at the till, he did not say if he was a genuine volunteer or workfare victim, but he seemed sympathetic to our point of view. The manager told us it was useless occupying the shop, the real managers weren’t there – they were in downing street, that is where we should demonstrate. She would not let us take film or photos inside the shop. She was firm but not aggressive.

After some 20 minutes, two boys in blue turned up. They asked the manager to ask us to leave, which she did, they then told us that we would be committing the crime of trespass if we did not leave, we did so calmly. Outside the police asked to talk to our leader, we explained we were a collective with no leader. We refused to give them our names, contact details, or the name of any organisation we might belong to. They explained if we went back into the shop we were to leave immediately if asked to by the manager or we would be committing trespass, this would be true the following day as well.

We continued our picket outside the shop for a further 30 or 40 minutes. It was a lovely early summer sunny day, Wood Green High Road was busy, many people took leaflets, and some stopped to chat and even to share their own experiences of the dole.

We will keep up the pressure on NLH: the best way to beat Workfare is if no organisation is willing to take part in the scheme  – as many have already pledged (see kvv.net)