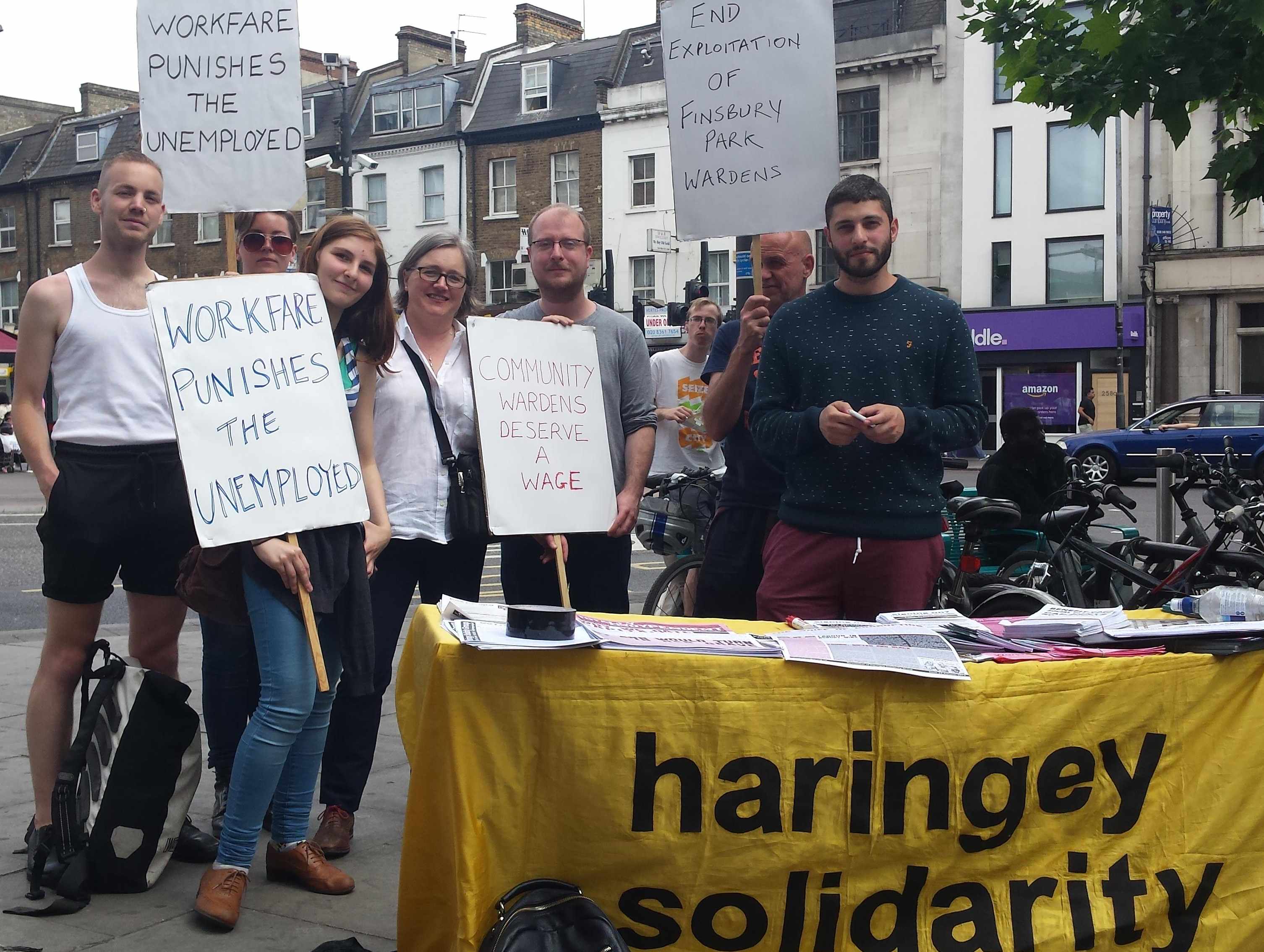 Activists from Haringey Solidarity Group and Boycott Workfare today held a demonstration against the use of workfare by the Finsbury Park Business Forum. Under the Tories workfare initiative recipients of benefits are being forced to work at least 30 hours a week of unpaid labour as community wardens or face harsh sanctions. Workfare placements last up to six months and refusal to take part in such unpaid labour can lead to the suspension of Jobseekers Allowance for up to two years. Community wardens are facing tough monotonous work, having to be out in all weathers and risk assault as unpaid security. Additionally as Islington council no longer allows workfare schemes many community wardens do not come from the area, and so struggle to be able complete basic duties such as giving directions. Ultimately the Finsbury wardens have become nothing more than window dressing, giving the illusion of security whilst being untrained for the task at hand. Workfare schemes such as this one take potential jobs away from people who need them and allow companies, charities and other groups to unfairly profit from this labour.

Activists gave out leaflets at all entrances of the station as well as running a stall at the main Station Place entrance and had positive reactions from both passengers and passers by. Tomorrow (Thursday 18th of June) there will be a communications blockade of Finsbury Park Business Forum between 12pm and 3pm (numbers/addresses below) to protest about the use of workfare. Such blockades and publicity campaigns have been successful in the past in forcing companies to withdraw from workfare schemes.

A representative from Haringey Solidarity Group said “The use of workfare exploits and preys on some of the most vulnerable people in our communities. All voluntary work should be voluntary, not forced. Finsbury Park Business Forum should withdraw from the workfare scheme as soon as possible and pay all their employees a proper living wage.”

The event has been reported in Freedom News

Haringey Solidarity Group can be contacted on the twitter handle @__HSG__ and by email at info@nullharingey.org.uk.

The Finsbury Park Business Forum can be contacted to complain about their workfare scheme on 0207 527 5172, by email at info@nullfinsburyparkbusinessforum.co.uk and on twitter @FPBusiness.