If you live or work in Haringey and are interested in getting involved in a campaign or activist group, below is a list of some of the groups that are around.

Campaign for investment in Council housing without strings, for such housing to remain in public control, for improvements to conditions, and against rent and service charge rises.

We are the umbrella organisation for local residents’ associations of all kinds around the borough – there are over 160 such groups. We support local RAs, and take up a wide range of ‘strategic’ issues. We generally promote community spirit and the empowerment of local communities.

We are an independent and very successful umbrella organisation and network for the 30 local Friends groups of Haringey residents who are active in ‘taking ownership’ of, and protecting and improving, our parks and open spaces.

We are local people who want to get rid of the current system which places profit and power before people’s real needs. To do this, we need to get organised, fight back and take over the decision-making in communities and workplaces. We support and participate in local campaigns, spread ideas and help create effective opposition to the powers that be.

HTUC is a federation of local trade union branches, the local body for the official Trades Union Congress, but in reality acts in support of campaigns, such as strike support committees, those opposing war, racism and other discrimination, as well as workplace issues.

No Borders London support all those in struggle against borders, against their incarceration in detention centres, against their deportation, against their super-exploitation as ‘illegal’ workers. They work to develop spaces of solidarity where resistance and life can be developed.

Their work focuses on raising environmental awareness and enabling people to move towards living more sustainably. They do this primarily through running permaculture courses, creating and promoting forest garden, and giving advice and consultations. They are based within the inner city of London and more recently in west Wales.

NTAG are a campaigning organization opposing the transport of nuclear waste through densely populated areas such as London.

Padeap are a vibrant and innovative organisation operating in Uganda (where it was set up in 1997), Nigeria and the UK. They promote African creativity, knowledge and skills and work on the challenges facing the continent through practical, community based projects.

Radical History Network of North East London
RaHN is a Haringey-based body, meeting monthly, which looks at issues that are local, topical or of special interest. Our supporters are libertarians, marxists, and miscellaneous others. They also regularly publish cheap, short booklets and attempt to put theory into practice by activity.

Reel News is an activist video collective, set up to publicise and share information on inspirational campaigns and struggles – not just in this country, but across the world.

Save Ally Pally and The Peoples’ Palace Trust

Save Ally Pally’s Mission Statement is: (1) to stop any sale of the Palace that’s not for charitable purposes; (2) safeguard the studios, mast, Victorian theatre and famous Willis organ, and protect public access to these; and (3) reconstitute AP’s trustees back to representatives of the whole of London and of the nation.

SHHCC is an alliance of organisations including healthcare workers, health campaigners, residents associations, unions and others, campaigning against cuts and privatisation of our local healthcare services.

SH supports the development of a Sustainable Haringey network, which will promote and encourage: (1) sustainable energy policies; (2) reduced consumption and waste, and maximised re-usage and recycling; (3) sustainable travel; (4) local production of food, goods and services; (5) the protection and improvement of green spaces and natural habitats; and (6) strong local communities.

Vegan Campaigns promotes veganism, mainly in the London area. Among the activities that have already taken place are vegan food fairs, information evenings, veggie burger giveaways and street stalls. We also helped to organise the London Vegan Festival in September 2005 and 2007.

WCCC came together to block a development earmarked for Wards Corner, Seven Sisters. The proposed scheme intends to demolish the Edwardian buildings and those in three adjacent streets, evict the vibrant Latin American market and build eight-storey blocks of flats and retail space. WCCC also wants to build on the vibrant and multi-cultural society that exists in Seven Sisters and has brought together residents associations and market traders and developed their own Community Plan for the site. 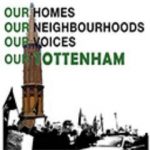