To mark the COP26 Climate Emergency Global Summit in Glasgow, around 400 local people* gathered opposite the Civic Centre on Saturday November 6th to discuss and demand immediate and effective action to safeguard our climate and society. Most of the speakers argued that the summit was long on promises and woefully short on fast and effective action that was needed NOW to phase out all fossil fuel usage in the world – some also recognised that continued capitalist growth was now unsustainainable. It was pointed out by many that economic and social change needs to be accompanied by massive support and justice for the most affected countries and communities around the world. This must include people in the UK who inevitably are and will be affected by growing climate instability and changing economic patterns. One young speaker pointed out that young people are very angry, and will be inheriting a catastrophic situation not of their making. All speakers stressed people could and should contribute by adopting sustainable lifestyles and also making demands for Government action. There was no open mike for contributions, and none of the speakers said that the real challenge is to build up a real grassroots mass opposition/counterpower to the current system and work to remove the causes of the catastophe – Governments and capitalism – and for people to take over ourselves and create a better society based on the real needs of people and the planet. Those points were left up to HSG members, who handed out informative leaflets** to publicise our coming meeting on the issue, Tues December 7th @ The Millennium Centre, 7.30pm. Many people present then went off to join 15-20,000 demonstrators at the climate action demo in Central London. 100,000 were also marching at the same time to the Summit Centre in Glasgow, and many more were doing the same all around the world. 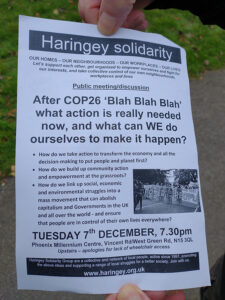