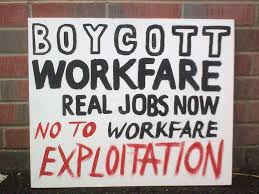 In May last year, the Department for Work and Pensions launched its latest workfare scheme for the long-term unemployed – Community Work Placements (CWP). Previous schemes met with outrage when corporations, like Tesco and Poundland, were seen to be increasing their profits through the use of the free labour of the unemployed. These schemes were rightly understood as a taxpayer subsidy to employers in much the same way that in-work benefits paid to the low-paid act as a subsidy to employers who pay rock-bottom wages. Consequently, CWP focuses on charities, although private companies can take advantage. The majority of those on CWP are placed in charity shops, where they have to work 30 hours per week for six months in return for their benefits, under threat of sanctions.

On the other hand, many well-known charities have taken one look at this scheme and refused to have anything to do with it and, in many cases, published statements to this effect including Cancer Research UK, British Heart Foundation, Marie Curie Cancer Care and Traid. In the majority of these cases, charities have taken a principled stand. They recognise that CWP constitutes forced labour which runs counter to voluntarism traditionally associated with the third sector. They also understand the vile nature of sanctions-backed workfare schemes.

Last year 900,000 claimants were sanctioned and lost all benefits for four weeks or more, resulting in rent arrears, hunger, a reliance on food banks and all manner of detrimental physical and mental health conditions culminating, tragically, for some, in well-documented cases of suicide and death by other causes. These charities, who try to provide for members of society in need, clearly understand the irony of participating in a scheme that seeks to punish some of the most vulnerable members of society.

Sadly, there are many charities who simply don’t get it or, if they do, prefer to ignore the fact that they are propping up this vicious scheme. One of those charities is North London Hospice (NLH). Many of us know only too well the valuable work that it undertakes for those facing life-threatening illnesses in our community and have nothing but respect for that. However, in our analysis, that does not and cannot justify their participation. As a consequence, we have been campaigning against their involvement for six months.

Why have we chosen NLH as the focus of our campaign against CWP when they are simply availing themselves of the scheme’s perceived advantages? Our preferred target would be G4S. They are scum of the highest order and run the scheme. They are a multinational corporation and despite the fact that we are throwing everything into this campaign, the idea that, without a national campaign, we could exert any sort of influence on their operations, is quite fanciful. Of course, an outfit like G4S does not get its hands dirty and has sub-contracted out the day-to-day running to smaller outfits like Urban Futures in Haringey.

Every week we talk to claimants, at the entrance to Urban Futures’ offices, who are forced to attend on the day they are not on placement in order to fulfil job search requirements. We have recorded a catalogue of stories of insensitive and inappropriate treatment at their hands which, in many cases, amounts to ill-treatment and abuse. Urban Futures’ management, with direct responsibility for the scheme, regard the claimants in their care (sic) as numbers, amounting to nothing more than a revenue stream. Some of the management team at Urban Futures are truly hateful, and claimants, along with our support, are constantly seeking out ways to put them under greater pressure in order to frustrate the scheme. However, getting through their doors and directly disrupting their activities requires numbers and, inevitably, will result in the intervention of the cops, as we experienced when occupying their offices recently. Ultimately, we have concluded that the best way to hit them and the scheme is to call on local charities to end their participation in the scheme.

North London Hospice runs 18 shops in North London and, by our reckoning, is a major supplier of CWP placements with some 50 claimants, from Urban Futures and similar organisations, forced to work in their shops. Should NLH reject the scheme, then CWP in north London would be completely bent out of shape.

When we first heard of NLH’s use of workfare, we thought perhaps they didn’t know that the people on Community Work Placements were there under threat of sanction from the Job Centre. So we emailed and called their head office.  When that resulted in no response, we tried leafletting outside their shops, talking to potential customers and passers-by in order to raise awareness of the scheme and opposition to it and NLH’s participation. The public are proving to be most receptive to our efforts as we explain the nature of the punishing regime claimants are subjected to and they realise the contradictions of NLH’s activities. In parallel, we have been in conversation with the charity.

After two months of this, we received a short email from the hospice, stating that they were reviewing their “volunteering” programme. So we carried on leafleting outside their shops: on one occasion, visiting eight in one day.  It was only after we contacted the patrons and trustees of North London Hospice that we finally, in December, received a proper response, one which appeared to indicate that our message was getting through.

They told us that, following a strategy review to increase the number of volunteers in their shops, “when current work placements come to an end, we will aim to replace them with volunteers from the community”. Hinting at a new-found ethic, they followed with, “It is our firm intention that the shops … are supported by those who give freely of their time and expertise.” Although encouraged, we were mindful that the scheme, in its current form, still had 18 months to run and wrote again asking for a timescale for the end of their participation in the scheme. We also asked that they signed the national Keep Volunteering Voluntary pledge. Finally, we informed them that our campaign would continue unless and until we received assurances that their commitment to withdraw from the scheme was both genuine and imminent.

Our caution was well placed. They responded, in categorical terms, that they cannot sign a pledge amounting to a political statement as they are a registered charity – an excuse not raised by many other charities. Their letter made no reference whatsoever to our request for a timescale for withdrawal from the scheme. Particularly troubling, was the news in early January, following the discovery by Cancer Research UK head office that their local shops had been duped into taking on maybe a dozen workfare placements by Urban Futures. On discovering that these were not bona fide volunteers, the placements were finished and the claimants on them were sent back to Urban Futures. And so it was that, just a few weeks after telling us that they were committed to withdrawing from CWP, North London Hospice took on one of these claimants on a new placement.

We have no great desire to make life difficult for NLH. We have no great desire to spend our Saturdays leafleting outside their shops. However, we are motivated by our desire to act in solidarity with our brothers and sisters who find themselves subjected to a demeaning, punishing and near-worthless scheme which has little purpose other than to demonstrate to the British electorate that this odious coalition government is tough on welfare except, of course, when they are bleeding the system dry from positions of privilege.

At a recent leafleting of NLH, outside their Crouch End shop, six of us distributed 500 leaflets and, during the course of a discussion with the manager, a passer-by told him in no uncertain terms that she would not be using the shop while they still used workfare. We will continue our campaign because we feel it is important that as many people as possible understand precisely just how their fellow citizens are being punished whilst the rich get richer at the expense of us all. We will continue our campaign until the management of North London Hospice gets it too.

We would hope that you will get it and feel sufficiently motivated to grow our campaign against CWP. North London Hospice is not the endgame but a stepping stone. The sooner NLH pull out, the sooner we can campaign against other charities’ involvement.