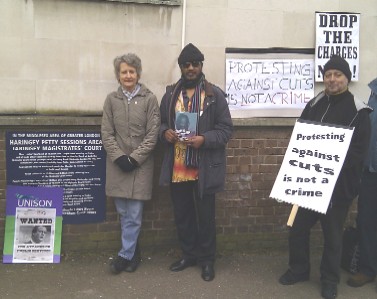 On 24th February a rally took place at the Haringey Civic Centre to protest against local government cuts. The demonstration was called by the Haringey Alliance for Public Services, in opposition to the £41m cuts to local services, which include the closure of three residential homes and four day centres for older people, a 75-per-cent cut in the Youth Service budget and the cutting of 19 staff from the Parks services.

Two Haringey residents were arrested at the protest for no apparent reason by members of the Territorial Support Group. They were part of a group of people that the “riot police” started pushing forcefully down the stairs, including young and elderly. They were held for nearly 24 hours before eventually being charged with assaulting a police officer.

They appeared at Highgate Magistrates’ Court on Tuesday 15 March for the first hearing and about a dozen local anti-cuts protesters and friends of those arrested held a solidarity protest outside the court. The actions of the councillors or the police should not be allowed to infringe on our freedom to protest, campaign and organise against these and other public sector cuts, which attack the most vulnerable in our community.

In contrast to many reports in the local or national media the protest on the 24th appeared to be good-natured and friendly. People faced with savage cuts came in good spirit and were chanting slogans with the intention to have their voices heard. Nothing more. The only aggression shown, we feel, was that of some police and especially officers from the Territorial Support Group. Their heavy-handedness was apparent to many from the moment they entered the premises.

The undeniable tragedy on the night was the voting through of the biggest and most savage cuts that this borough has ever seen. For local residents who will soon see the closure of old people’s homes and youth centres, and watch their local parks fall into disrepair, the disruption caused to the council meeting will be nothing compared to the misery the cuts will cause.

The protest was a clear show of frustration by Haringey residents and an important moment of the anti-cuts movement in its struggle to save vital public services and jobs.

We stand in solidarity with our fellow protesters and friends that were arrested and urge all residents to join the local struggle against the cuts.

Protesting against public sector cuts is not a crime – drop the charges!

**UPDATE: The trial date for the two protestors has been set for the first week in September.  If you would like to show your support, please get in touch by email or phone (0845 223 5270).**

For more information and to sign up for updates about the local campaign against public sector cuts, see the website of Haringey Alliance for Public Services.

Join other Haringey residents on the March for the Alternative. Meet 10am, Saturday 26 March at Seven Sisters, Turnpike Lane or Finsbury Park tube stations to go down to central London together.