New pamphlet on the history of the New River 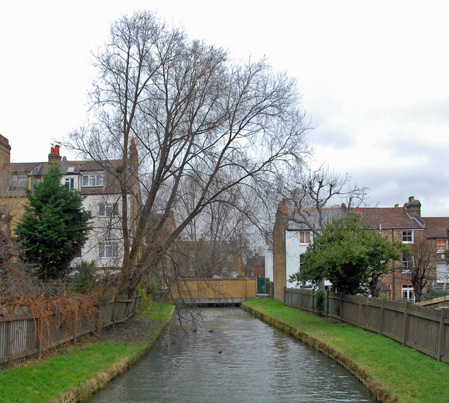 North London’s man-made water supply, the New River, is 400 years old this year… Much has been made of its history; but it isn’t well known that the New River’s creation and development is intimately bound up with the growth of capitalism.

Now radical history publishers Past Tense have just produced a new pamphlet, ‘Free Like Conduit Water’, an updated and expanded version of our old pamphlet on the New River. Author John Tyre discusses the moral economy of water distribution in medieval London, and how the New River, in effect the first Private Finance Initiative, altered this in the interests of embryonic capitalism. Read how the River became contested between the Company and the people who lived near its banks, who subverted it for their own uses…

‘Free Like Conduit Water’ also includes a long walk down the River’s length in London, including trespasses where Thames Water won’t let you and me go and relates it to the radical history and present of some of the areas it passes through, from enclosure riots on Enfield Chase, through squatting on the North Circular, arson and rebellion in Tottenham, speakers corners in Finsbury Park, to disorderly open spaces in Clerkenwell.

‘Free Like Conduit Water’ is available for £5 plus £1.50 P&P from past tense, c/o 56a Info Shop, 56 Crampton Street, London SE17 3AE, (cheques payable to ‘past tense publications’), or from the publications page at www.past-tense.org.uk.