Homes for Haringey and Groundwork picketed over workfare 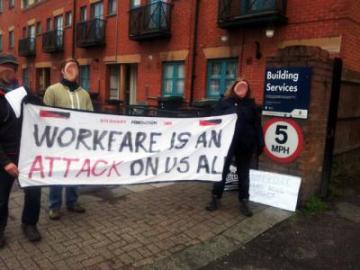 On Monday 18 March, North London Solidarity Federation picketed the Homes For Haringey offices in Wood Green and the depot for Groundwork, in Tottenham, who are employed by the Council to provide gardening and improvement services on estates in the area. The demonstration was against Groundwork’s use of workfare; unemployed people are forced by Jobcentres to do the work. They are not being paid for it and they can’t refuse or they would lose their benefits for two months.

There are over 6,500 people looking for work in Tottenham and this number keeps on increasing. The area has the highest unemployment in London. What is Haringey Council doing? Hundreds of people providing essential services have been made redundant and now they are being replaced by unpaid workers.

At the same time the council is pouring £3.5 million into sketchy subsidies to businesses. The council clearly have both the money and the work that needs doing so why can’t they employ people directly?

Workfare doesn’t help the unemployed . Each of those ‘volunteers’ is doing what could be a paid job for a Tottenham resident. Those in work feel the pressure too, as their jobs can be easily replaced with forced unpaid work, at a saving to the employer. This is why we have to fight against it together.

We need to tell Homes for Haringey and Groundwork to stop using workfare in Tottenham and we’ll keep coming back until they do!

This action was also in support of Boycott Workfare’s National Week of Action against Workfare. See their website for more local actions.