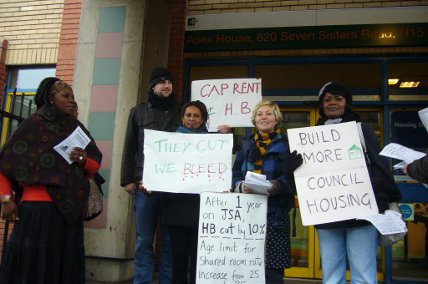 Haringey residents and members of Haringey Housing Action Group joined together to take action to oppose changes to housing benefit as part of the National Protest Against Cuts to Housing & Welfare Benefits. The group leafleted and talked to residents visiting Apex House in Tottenham, as well as council staff and passersby to raise awareness of the planned changes and how they will affect all of us, council workers and residents of Haringey. We discussed ways that we can fight back and resist the cuts and encouraged people to get involved.

We then went to central London to join the national protest, where the ‘Housing Emergency’ campaign had brought together organisations and individuals to oppose attacks on Housing Benefit, rents and secure tenancies, and for investment in new and improved council and affordable secure rented homes. Other protests took place in cities across the UK.

The National Day of Protest Against Welfare & Housing Benefit Cuts on 15th December 2010 is planned to be the first of many. The next is on Monday 24th January 2011.