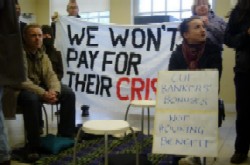 Local anti-cuts protestors “bailed in” to the Wood Green branch of Barclay’s Bank to protest against the government cuts agenda.

About half of the 30 or so local residents occupied the bank and turned it into a home – with rugs, chairs and cushions – to bring attention to the number of people that will face homelessness if cuts to housing benefit and other public services go ahead. The occupation lasted over half an hour, before the protestors left.  The branch remained shut for at least another an hour.

Despite the wet weather, protestors remained in good spirits, chanting: “Cut bankers’ bonuses, not public services” and holding banners saying “we won’t pay for your crisis” and detailing cuts that will leave people under threat of eviction.

The protest took place the day after Barclays were forced to admit it had paid just under 1% corporation tax on its £11.6bn profit, and in a week that the bank announced profits of some £6 billion.

Barclays have just paid £3.5bn in bonuses, with average pay per employee in the investment banking division rising to £236,000 – that’s ten times the UK’s average salary. It was this greed, and the recklessness of the banks, that caused the economic crisis. Yet the government are making ordinary people pay the price. David Cameron himself has said that the cuts will change Britain’s “whole way of life”.

The government are lying to us when they say that the cuts are a necessity. They are a political choice. The government could get tough on the banks, they could tax bankers’ bonuses, they could stop the tax avoidance of the super-rich. Instead they choose make people pay by cutting essential public services, which will drive poor people out of their homes, increase homelessness and make local services unmanageable.

The British taxpayer bailed-out the banks with £1 trillion of public money and they haven’t paid us back. So now we’re bailing-in. We’re transforming the banks into schools, youth centres, libraries and council housing – all the things that the government want to privatise and cut.

The government’s cuts are not ‘fair’, we’re not ‘all in this together’, and there are alternatives. Make the banks pay for the crisis they caused. Barclays could pay for the crisis with a stroke of a pen. It’s our society that’s too big to fail, not the broken banking system.