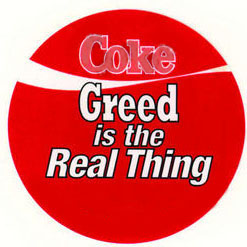 Workers at the Coca-Cola manufacturing and bottling plant in Edmonton have been on strike for two weeks. They have been offered a below inflation 2 per cent pay rise, while conditions have worsened in the factory. The pension scheme is now crap and there are redundancies going on, including 19 here at Nobel Road. This is despite the Company making £620m profit last year! The workers are bitter about the non- negotiating management, saying this is a dictatorship.

Next planned strike dates are: Wednesday 29th and Thursday 30th September, after which the action will be intensified. Currently picket lines are mounted from 3pm til 9pm, as the strikes are organised around the start/end of shifts.

In this climate of so-called “inevitable” cuts, the Coca-Cola strikers are brave enough to stand up for their rights, against economic exploitation and greedy bosses. All workers should show solidarity and take inspiration from them.

The last pickets were lively and noisy with around 35 workers present, carrying flags and placards saying “Fair play not foul play for Coca Cola workers”. Chants and shouts echoed the site, while the loudspeaker blared out the pop song “Money, money, money, it‟s a rich man‟s world”. Passing cars and trucks hooted in support. A samba band with members from Columbia came and a car load of suits from the Unite Regional and National offices made speeches. Local union members came as well, including a group from a nearby bus depot.

Although the present action is unfortunately limited to Edmonton, Coca-Cola has many plants in the UK – manufacturing, distribution, head and regional offices, etc. These are at Uxbridge, Hammersmith, Sidcup and Poyle, Milton Keynes, Coleshill, Northampton, Peterborough and Nottingham, Cardiff, Bridgend, Colwall and Bristol, Wakefield, Warrington, Peterlee, Morpeth, East Kilbride and Aberdeen. All are suffering cuts, job loss and pay erosion as management rationalise production.

Some of these will be unionised, all could be visited by workers or supporters. Managers would be upset to see solidarity pickets outside the gates but the workers‟ negotiating position would be greatly increased. So come and help spread the strike!

Try to get to Nobel Road, N18, for future strikes. It’s just off the roundabout, on Meridian Way, north of Tesco. Tube to Tottenham Hale then bus up to IKEA/Tesco. Or nearby Angel Road overhead station [Not far from the now demolished Visteon site]. You’ll be among friends if you can make it.