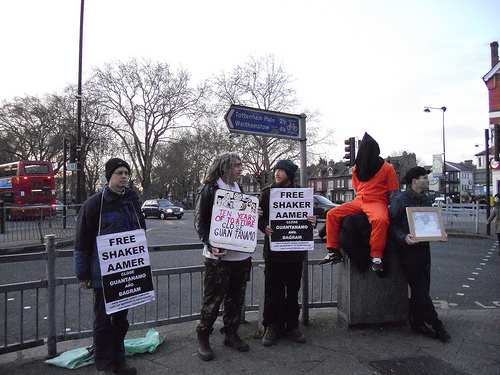 As friends gather in Washington D.C. to demand the closure of Guantanamo, we take to the streets in Haringey

This morning, 11 January, on the 10th anniversary of the opening of Guantanamo, folks from Veterans for Peace, No Borders, Haringey Solidarity Group and Giuseppe Conlon Catholic Worker House gathered in Turnpike Lane, Haringey to demand the immediate closure of Guantanamo and other US gulags.

Our gathering included three former prisoners and a British veteran of the wars on Iraq and Afghanistan.  We made a specific call for the release of Londoner Shaker Aamer.

Shaker Aamer was cleared for release by the US military in 2007. He claims to have been tortured repeatedly during his time in US custody, on one occasion in the presence of a British intelligence agent. He has a British wife and four children living in Battersea, south London. He has never met his youngest son, who is almost 10 years old. Former prime minister Gordon Brown sought his release in August 2007, along with four other residents held at Guantánamo Bay, the last of whom was released in February 2009. His lawyer, Clive Stafford Smith, has recently expressed grave concerns for his physical and mental health due to prolonged arbitrary detention.