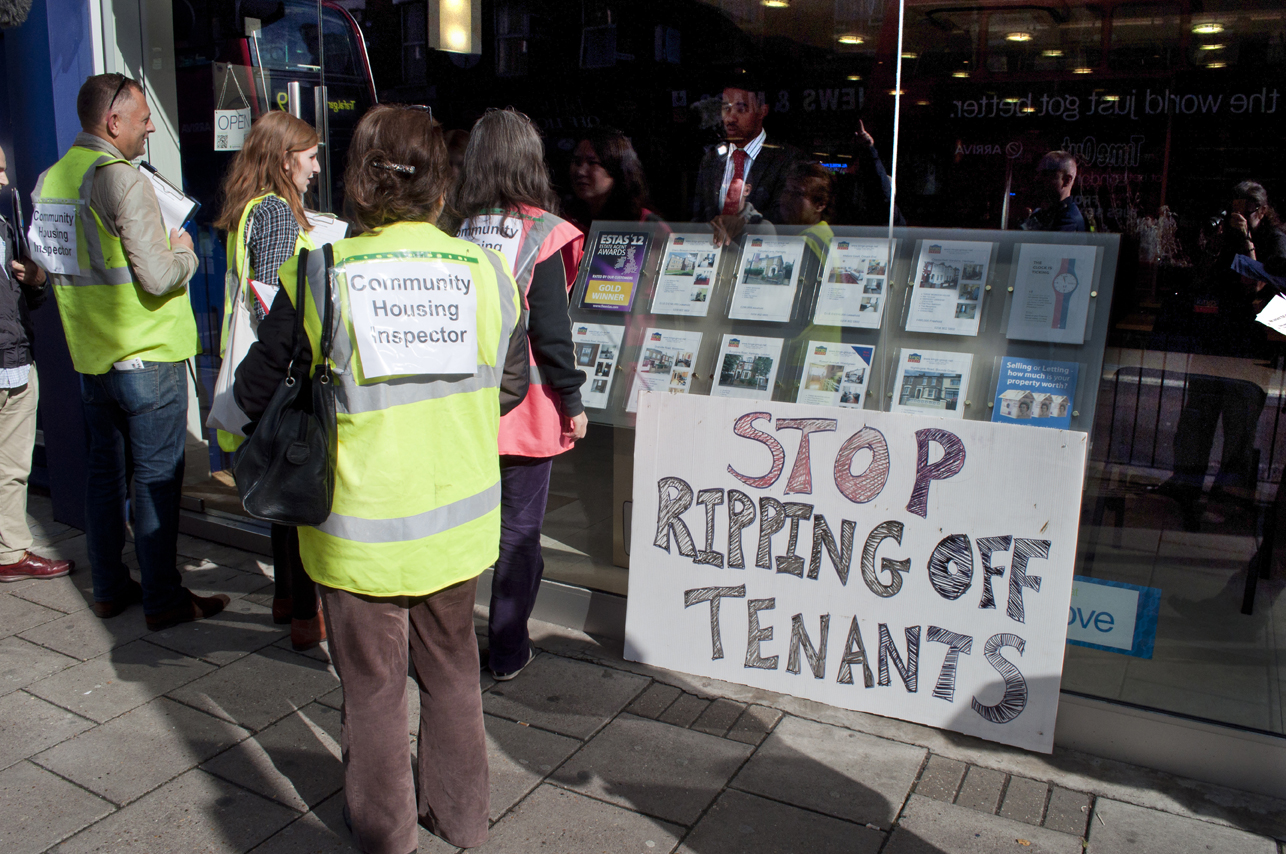 No entry at Kings letting agents

On Saturday 6 October, a team of Community Housing Inspectors took a tour of local letting agents along Green Lanes to investigate their practices. About 20 people took part in the inspection, asking letting agency staff about their company policies, including: whether they accept tenants claiming housing benefit; how many months deposit they require; what charges they make to tenants; and what is the longest tenancy period they offer. Of the agencies visited, four agreed to take part, while Winkworths, Kings Group, Bairstow Eves, Brian Thomas and Anthony Pepe all denied access or refused to speak to the self-styled inspectors.

The protest took place against a backdrop of housing benefit cuts, a lack of Haringey letting agents willing to accept tenants on housing benefit, rent inflation outstripping wage inflation, and a concern that landlord and letting agent practices are leading to a significant change in the local demographic.

Rent increases in the private rented sector are not driven by increased costs. In a recent survey by Shelter, only four per cent of landlords said they had increased rents because increased mortgage costs. By contrast, one in five had put up rents because their letting agent had encouraged them to.

Renting out property is not a business like selling luxury cars: housing is a basic necessity.  When letting agents put up fees and rents, this pushes tenants further into poverty. Haringey Housing Action Group will support any tenants facing eviction because they cannot pay their rent.

The protest felt like a huge success.  We managed to gather information that will be of help to prospective tenants in the borough (the results will be publicly available), and we put across our demands to the letting agent staff, as well as to hundreds of passersby, many of whom told us of their own bad experiences of local letting agents. We also shut down a handful of letting agents, possibly the ones who felt they had more to hide. And we turned the tables on the letting agents who carry out checks on our homes without permission.

Haringey Housing Action Group organised this action alongside Haringey Solidarity Group and Haringey Private Tenants Action Group. We are part of a growing network of groups in London who are beginning to take action around the increasing housing crisis, groups such as Hackney Housing Group, Housing for the 99%, Hackney Digs and Camden Federation of Private Tenants.