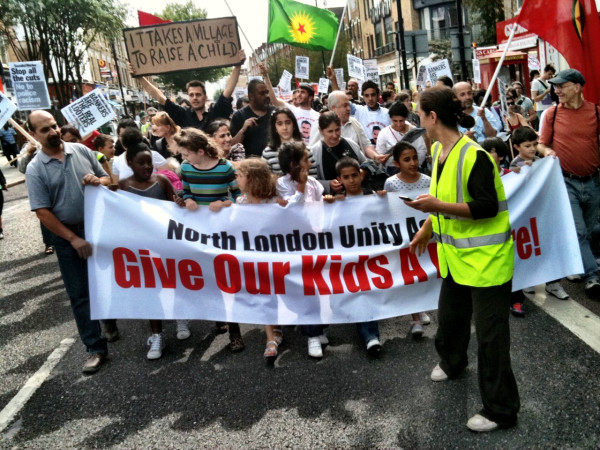 3,000 march through Hackney & Haringey on Saturday 13th August to demand:
Give Our Kids A Future!

On Saturday 13th August, 3,000 people of all ages and backgrounds, mainly from Hackney and Haringey, but with additional support from all around London, marched from Gillet Square, Dalston in Hackney, to Tottenham Green in Haringey.

The march was organised and publicised just 2 days before by the hastily formed North London Unity Assembly initiated mainly by Turkish organisations and the Haringey and Hackney Anti-cuts Alliances [see list of some of the supporters at the end].

The aim was to provide a united community response to the recent disturbances, especially those in Tottenham and Hackney, and to the causes of despair and frustration that can result in riots. The march was led all the way by a dozen children behind a huge ‘Give Our Kids A Future!’ banner, followed by a mass of placards and banners from a wide range of community groups, trades union branches and political organisations as well as hand-crafted placards from scores of individuals.

Up to 10,000 leaflets were distributed to the public. The march, which progressed without incident, finished with an ‘open mike’ rally outside Tottenham Town Hall. This consisted of short but heart-felt speeches from over 30 of the marchers explaining how they felt about the recent disturbances and putting forward their views on the way forward for a better future for our youth and for our communities generally.

The Unity Assembly is calling for a culture of valuing, not demonising, youth and unemployed people; support for those affected by the rioting, including the immediate rehousing of people made homeless, grants for affected small businesses, and restoration of damaged areas; reversal of all cuts to youth services in our boroughs; no cuts to public services, but instead, investment into community-led regeneration of our communities, including access for all to decent housing, jobs, education and sports facilities; an independent community inquiry into policing methods in our boroughs, and an end to discriminatory stop and search; and availability of legal support for all those people arrested by police.

We are responding to the events of the last few days, in particular the Tottenham protest over the killing of Mark Duggan and the disturbances that followed in Tottenham and Hackney.

By coming together and calling for unity we want to encourage all sections of our local communities, young and old, black and white, residents and workers, to work together to find solutions to some of our long-standing problems.

We know there are all kinds of strong feelings and differing views. We do not claim to represent the whole community, but merely seek to promote unity in the communities in which we live and work.

Simply labelling rioters as opportunistic criminals does little to relieve tensions and provides a poor explanation for the worst riots in decades. While the shooting of Mark Duggan provided the trigger, against a background of oppressive policing, especially towards ethnic minorities, the root causes are deeper.

Our communities have been blighted by high levels of deprivation, poverty and lack of opportunity for decades. Inequality is growing and recent funding cuts to local services, particularly youth facilities, along with rising unemployment, and cuts to EMA and benefits have exacerbated the conditions in which sections of frustrated young people turned to rioting, which unfortunately has resulted in people losing their homes and small/family businesses losing their livelihoods.

Britain is a wealthy country, but with deep inequality. The economic crisis created by greedy bankers and financial speculators is further impoverishing already poor areas like Tottenham and Hackney. The £390 billion of combined wealth of the richest 1,000 people in Britain should be redirected to fund the services we all need.

In the last few months we have seen mass local protests against cuts, student occupations to defend free education, a half-a-million strong demonstration on March 26th, and 800,000 public service workers out on strike on June 30th.

We need to build on these and other inspiring local and national struggles. Let’s work together for a decent society, based not on greed, inequality and poor conditions, but on justice, freedom, sharing and co-operation.