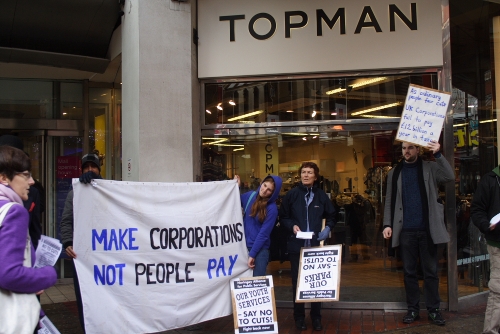 An angry crowd of Haringey residents marched on Wood Green Topman and Boots shops this morning (Sat 4th Dec) in protest against the corporations’ tax-dodging activities and against the government’s cuts. Protesters gathered outside Boots with placards, leaflets and a banner reading “Make corporations not people pay”.


A tax collector from the Haringey Big Society for Revenue and Customs was amongst the protesters. He led the crowd into the shop as customers were alerted of Boots dodgy tax practices by protesters. He then gave the store manager Boots’s £86 million bill for him to pass on to the company’s management. It was made clear to staff beforehand that the action was targeted at management not workers. The crowd only left the shop when it was agreed that the tax bill would be passed on to management.

The scene was then repeated at Topman a few yards further down the High Road. Retail billionaire Philip Green’s tax bill was left to the store manager. Outside, a megaphone was used to inform the public of the corporation’s tax evasion tactics, which are damaging everyone.

Rather than fighting tax avoidance, the government is making us pay for the bill by imposing cuts to all services. This morning, the Big Society for Revenue and Customs sent a clear message to corporations and politicians that we will not bow down to this!

How Boots are walking right all over us

As exposed by the media, Boots the Chemist are stealing £86 million a year from the public thanks to a tax dodge. They moved their Headquarters to Switzerland to avoid paying UK taxes and the government are letting them get away with it.

Retail billionaire Philip Green, head of the Arcadia Group (Topshop, Topman, Miss Selfrdige, Burton, etc…) dodged a £300m tax bill in 2005! The group is registered in the name of his wife who lives in Monaco. Despite this, David Cameron has recently appointed Philip Green as a public spending adviser!

This is all happening at the same time as massive cuts are made to public services. What we are seeing is a deliberate attack on the majority of the population by corrupt politicians who work hand in hand with greedy global businesses. The rich are getting away without paying taxes while the poor, the unemployed, the disabled, students and public service workers face the brunt of the cuts.

This is no coincidence! The cuts aren’t made out of economical necessity but are driven by the government’s anti-working class agenda.

We say we have to fight back! The anti-Vodafone protests, the students protesters in London and striking London Underground workers have shown us the way. We have to make it quite clear to the ruling elite that we will not put up with DAYLIGHT ROBBERY from Boots, Vodafone, Bankers or any other Fat Cat criminals!