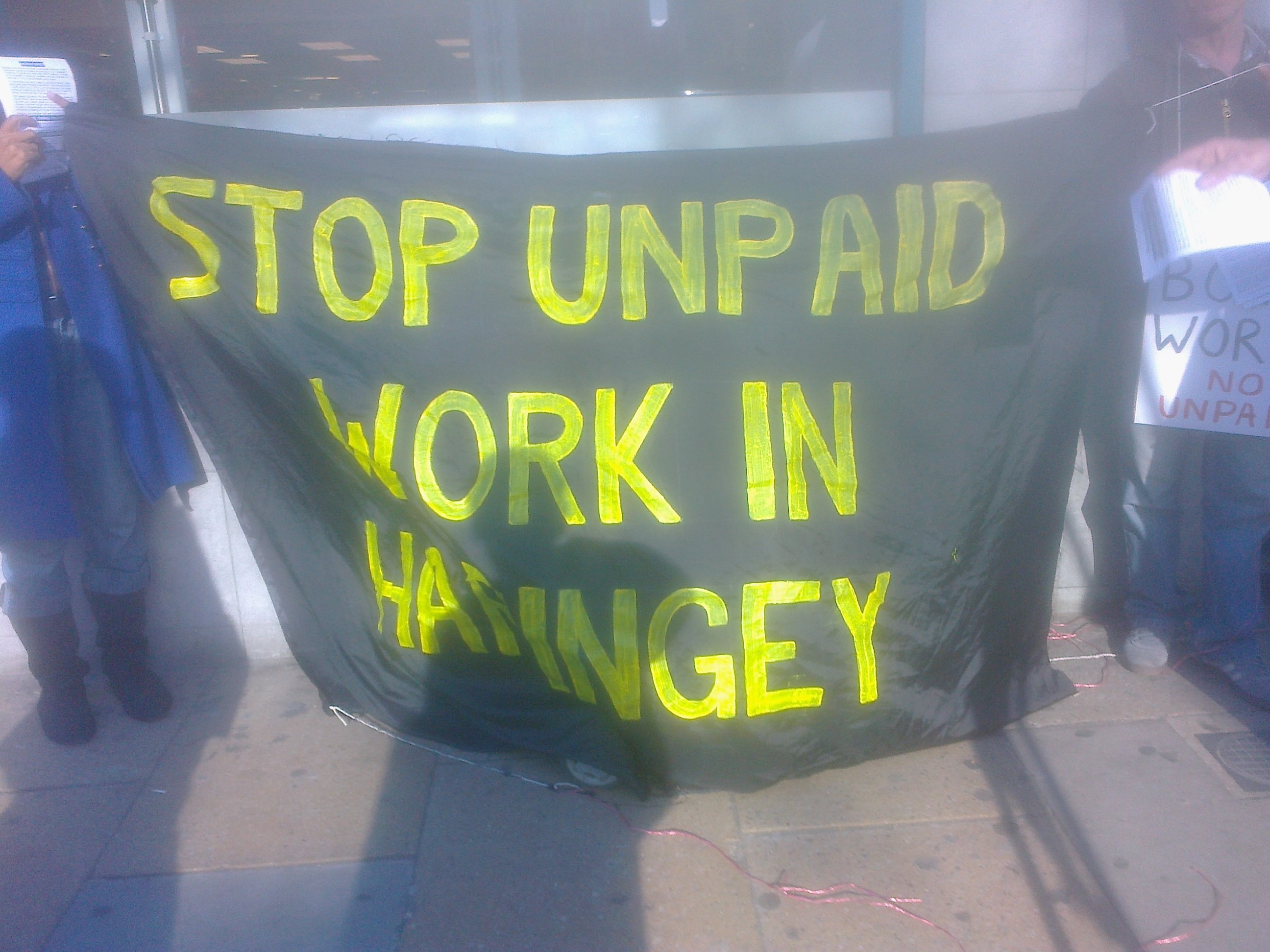 On the afternoon of Friday 7 March members of HSG headed to Poundland on Wood Green High Road to hold a protest against the company’s continued use of free labour, in particular its exploitation of young unemployed people, as part of the government’s workfare schemes.

400 leaflets were given out in about 45 minutes by the seven people at the protest. There was a lot of interest in, and anger at, Poundland’s practices and the government’s workfare policies in general.

Some members of HSG went into the store to talk to staff, one of whom confirmed that Poundland’s “work experience” scheme is in operation at the Wood Green shop. They were also told that Superdrug on the High Road have taken on staff ‘referred’ from the job centre.

No-one from the management approached the protestors to deny that the store uses workfare or to try and discuss the protest.

With the sun shining it was a great day for a picket – hopefully the weather continues next month when we will be out on the streets again to picket another company in Haringey that uses free labour from a workfare scheme.

Workfare is a set of government schemes in which unemployed people are forced to work for companies and charities for no pay. If they refuse to participate, they can have their benefit payments stopped.

If you would like to get involved with our campaign against workfare in Haringey please contact info@nullharingey.org.uk or watch out for the call-out for the next HSG picket.

Poundland exploits young unemployed people by offering them ‘work experience’ for no wages, as part of a scheme run with the help of the Department of Work and Pensions (DWP). Although the company claims otherwise, people can still lose their dole if they don’t cooperate.

In April last year Poundland said it was launching a new ‘work experience programme’ after it was criticised for taking part in one of the government’s ‘workfare’ schemes. In these you have to work for your dole, or lose it.

On Poundland’s ‘work experience programme’, aimed at unemployed 18-24 year-olds, you can end up losing your benefits anyway if you don’t cooperate. Refusing to take up an offer of ‘work experience’, or dropping out after more than a week, means you can be forced into ‘Mandatory Work Activity’. If you don’t go along with that, you lose your dole.

Poundland makes millions of pounds in profit every year. If they want workers, they should pay them. Following public pressure, dozens of companies and charities have pulled out of the government’s workfare schemes. We think Poundland should do the same.