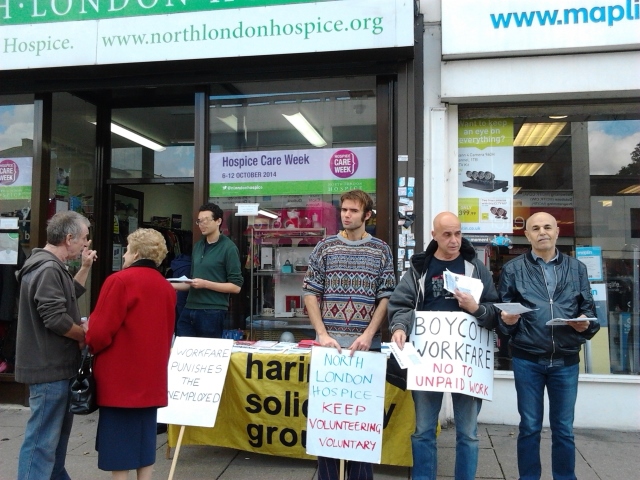 About fifteen people, turned up at the North London Hospice Shop in Wood Green today, to protest at their use of forced labour, and to ask them to sign up to the Keep Volunteering Voluntary pledge.

North London Hospice has been staffing some of its 18 shops across Barnet, Enfield and Haringey with people on Community Work Placements. These people are forced to work for their benefits, or they face having their benefits stopped – four weeks for the first breach, and 13 weeks for the second.

We had some lengthy chats with people working inside the shop – mainly those lucky enough to be paid – and were surprised and saddened to hear the view that the people on CWP had a “choice”, that they were not forced to work there.

This “choice” is not a choice at all – it’s the choice between working at the shop, or facing having your benefits stopped, leading to possible destitution or starvation.  Hardly a choice at all.

Article 4 of the Human Rights Act protects the right of humans to live free from forced labour – this is work which is carried out under threat of physical or psychological harm.  In many people’s eyes, six-month workfare comes pretty close to contravening this right.

This is one of the many reasons why we are asking charities like North London Hospice to reconsider their involvement in the scheme. It’s why we want them to pledge not to staff their shops with anyone other than those who are paid a (living) wage to be there or who have genuinely offered to volunteer their free time.

Have a look at our earlier articles for more info on how to contact North London Hospice, if you have any views on their involvement with workfare.