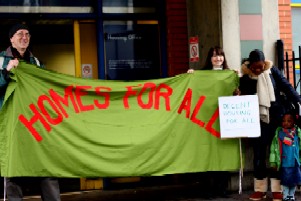 Last week, Haringey Solidarity Group took action with M, a Haringey mother, facing eviction from a private tenancy. The council had finally agreed to house her, but would not do so until she had been physically evicted. M just wanted a few days’ notice to make arrangements, and to put her mind at rest.

M had been living with her three children in a one-bedroom flat. She originally asked the council to house her because of the overcrowding and repairs, which her landlord was unwilling to carry out while she was living there. The council refused to help.

When the landlord ended her tenancy, she asked the council again. They told her to stay in the property and wait for the courts to evict her. Only then would the council consider her as being threatened with homelessness. This goes against even the government’s own official guidance.

The eviction process can take up to six months, at great public expense in court fees and other costs.  But the council tells people to wait, hoping that tenants will find alternative accommodation.

So M waited patiently for more than six months, while the council did its best to turn her away.

In this time, the council encouraged her to find accommodation in the private sector, rather than make an official homeless application – a deliberate way to bring down homeless figures for the borough and meet central government homelessness targets.

Moving house is one of the most stressful things we do in our lives. The council causes unnecessary and additional stress by refusing to help earlier. Frequently, families have to turn up at the council’s offices with their suitcases and have to wait all day before finding out where they will be spending the night.

The council has resources to prevent this. They can begin looking sooner. And the more time they spend, the more likely they will find something suitable.

We were told to move our banner as it was causing a disruption. But we pointed out that it wasn’t nearly as disruptive as being evicted.

It wasn’t long before we had a manager from the lettings team come down and confirm to M that she would be able to pick up the keys to a three-bed flat the next morning.

The action was an all-round success, and M has now moved in to her new home. However, without the banner and the threat of wider publicity, it is unlikely that the council would have offered M anything. During previous contact with the council’s housing advice and homeless teams, the response from council workers was a definite “no”. Challenging this resulted in antagonism from the officers being questioned.

But it is not our intention to vilify council staff. We are pleased that the action did not descend into a “them” vs “us” situation – with the council on one side and residents and protestors on the other. We understand that council worker’s attempts to avoid providing temporary accommodation are resource driven and a result of a shortage of appropriate social housing.

Rather than taking it out on Haringey residents, we think that council workers should be pushing for more council and social housing to be built. Just across the road from Apex House is the Wards Corner site that has been earmarked by the council for demolition. The developers, Grainger, have proposed to build over 100 “units” of housing, but not one of them will be classed as “affordable” or “social” housing. Companies like Grainger, and their profit margins, are dictating housing policy in Haringey.

M will probably have to wait ten years before she has accumulated enough points to successfully bid for a property that will house her family. Haringey Council workers and residents should be fighting together to resist the power of companies like Grainger. By reversing the decline in the numbers of council houses being built, practices such as those encountered by M could become a thing of the past.

If you are facing housing problems and would like support to assert your rights, you can send an email to Haringey Solidarity Group’s housing action group. We meet twice a month, currently the 3rd Thursday and last Friday of the month – check the calendar for details.