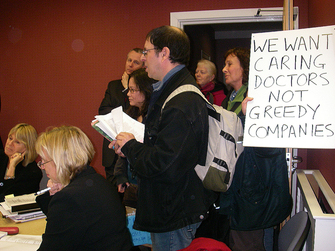 The campaign to stop privatisation at the Laurels health centre stepped up a gear today (Wed 26 Nov).  At the board meeting of Haringey’s Teaching and Primary Care Trust, local residents demanded that they reverse the decision to privatise one of the GP practices at the Laurels.

About 20 campaigners gathered inside the grounds of St Ann’s hospital at a lobby called by the recently formed Laurels Action Group. But when the meeting began, Richard Sumray, the TPCT chair, refused to hear a brief presentation by a spokesperson for the group. He adjourned the meeting, despite calls to the contrary from the members of the public present.

The entire board then upped and left, but were trailed by the quick-witted campaigners to a bolt-hole in a nearby building.  As the board attempted to resume their meeting, there were repeated requests for them to hear the short presentation, but these requests were met with stony stares.  One of the local residents present said, “it was like being in a room full of zombies, they refused to make eye contact with any of us.”

But the presentation was made anyway, over the top of the ridiculous attempt by the board to carry on their meeting as though nothing out of the ordinary was happening.  They were reminded by vocal Haringey residents that the health service should not be run for private greed.  More specifically, they were told about the lack of consultation with Laurels users about the tendering process and of the “improper and unlawful” plan to develop a Polyclinic in a public building built with local regeneration money in 2003 with strict restrictions on its usage.

After about 20 minutes had elapsed, the campaigners decided they had made their point for now and left, just as the police arrived.

Update: The management contract for the GP service was eventually awarded to the GP-run PMS practice which is also located in the Laurels Health Living Centre – a “partial” victory for campaigners.