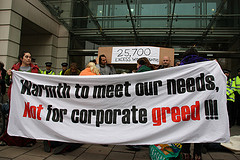 Come and join us – don’t sit in the cold alone!

We will be calling on all shops, pubs and public buildings to welcome those who wish to get warm.

Fuel poverty should be seen as a public scandal, not as a private problem. One in four families in the UK is shivering, out of sight, behind closed doors. There were a shocking 25,700 additional UK deaths last winter compared with other seasons. Yet the ‘Big Six’ energy corporations are making massive profits. The government and energy companies may want to keep it this way, but we say this can’t go on.

In the UK, these companies are deciding how 99% of our energy is sourced, produced and priced. Under this monopoly, we have no say in these decisions, despite them having a major effect on our health and on our climate.

So, we’re coming out with thermos flasks and snacks, info displays and games to hold a public coffee lunch for local people of all ages. Together we will ‘warm up’ in a local venue, check our energy bills and tarriffs, have a good chat, and call for people’s welfare to come first!

THE SHOCKING FACTS ABOUT OUR ENERGY SUPPLIES

One in four UK households are in fuel poverty. Many have to choose between heating and eating this winter. The Office for National Statistics calculates that there were 25,700 excess winter deaths last winter in comparison to other seasons. Many of these deaths were due to the fact that people could not afford to heat their homes. Six companies have a 99% monopoly over UK energy and are making record profits from the deadly bills. The government is cutting the Winter Fuel Allowance and local councils and landlords are doing little about the shameful state of housing and insulation.

The Big Six energy companies are: British Gas, EDF, npower, Scottish & Southern Electric, e.on and Scottish Power. Their profits per customer rose by over 700% over the course of a few months in 2011.

Recent ‘reductions’ to energy prices of around 5% come after rises of around 15-20% last year, and only apply to a minority of customers. They are not really reductions at all.

Fossil Fuels are running out and becoming ever more expensive. The energy companies pass this cost on to consumers, yet they blame green initiatives for the rise in price. The profit-driven addiction to fossil fuels (oil, gas and coal) is also behind climate change, which is already killing 300,000 people each year around the world through extreme weather events, floods, droughts and crop failures.

The Big Six and Government are making all the decisions about our energy, and they’re prioritising private profits over our rights to warmth and a safe environment. We want to see decision-making by the people for the people. Instead of paying billions in profits and bonuses to energy company bosses, we could secure sustainable energy and warm homes for all – join us to discuss how to get there!