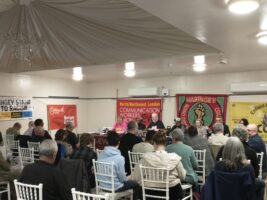 On 26th May, over 50 local activists from a wide range of organisations attended a Haringey Trades Union Council public meeting held at the Turkish Cypriot Community Association hall in Green Lanes.

The aims were:
– firstly to build support and publicity for the huge planned TUC march in central London on Saturday June 18th which will assemble in Portland Place W1 at 12 noon, to march to Parliament Square for a major rally opposite the Houses of Parliament from 1pm onwards;
– secondly to encourage and support industrial action and community solidarity to defend living standards in opposition to the growing austerity crisis forced onto working class people by the Government and by capitalism generally.

The following spoke out as reps from local organisations, but also in a personal capacity… *

A Communication Workers Union rep introduced the speeches and debate by explaining that the rich were getting (obscenely) richer by the year whilst the rest of us are seeing our wages, incomes and public services being continuously cut. This is a real crisis for millions of people. The Government’s supposed ‘£15bn response’ earlier in the day failed to address disastrous Government austerity policies over the last few years. He explained that millions of front-line essential workers, who were the acknowledged heroes throughout the pandemic, have been treated shabbily. He outlined a number of current postal workers disputes and further ballots for action among tens of thousands of their members being undertaken throughout the country. He quoted former RMT transport union leader Bob Crow: ‘If you fight you don’t always win. If you don’t fight you always lose.’ He called for the June 18th TUC demonstration to be massive, and a start of a real fightback across the UK and also here in Haringey.

A rep from a new union branch, Unite Migrants Food and Retail Service Workers, explained that he helped set up this branch just 6 months ago to ensure that migrant workers get to know their rights, that their needs are acknowledged and fought for, and they can be organised as a key part of the labour movement. He said let’s fight against the 1% at the top, and for the 99%. He was also representing the Day-Mer turkish organisation, with a strong presence in Haringey and Hackney, and they would be strongly promoting the June 18th TUC demonstration during their coming annual cultural festival in Clissold Park, and providing a contingent.

A rep from the Haringey Climate Justice Coalition (formerly the COP26 Coalition) said there was a Government and ruling class offensive against the working class and those of us at the bottom of the pile. 15m were in poverty in the UK, and even nurses had to join the 1.4m people accessing food banks to survive. Yet there were now over 100 UK billionaires with a disgusting combined wealth of nearly £700bn. This wealth needed to be reclaimed and used to benefit the public and the transition to an environmentally safe planet. The United Nations recognises that climate change/heating is a looming catastrophe and our civilisation is at ‘I minute to midnight’. Yet the Government’s response to the energy price crisis is to back further fossil fuel development rather than the renewables we need. The mass mobilisations around the UK (including Haringey) and the world last year during the COP26 global climate summit in Glasgow were inspiring, as has been the protest marches against the expansion of the Edmonton Incinerator. This shows there is anger and a will to fight for a better future.

A regional officer from Unite the Union said the June 18th march was very important but much more is needed. The march should serve as a focus and opportunity, a call to ongoing action. During the pandemic, the Government’s implementation of furlough wages for 9m workers didn’t come out of thin air but due to workers’ demands and trades union negotiations. We should remember the dozens of bus workers who died from covid and how their unions forced management to install special protective screens. Since January alone he had supported over 125 local Unite strike ballots around the region, most calling for industrial action.Many succeeded in winning demands, eg a 2 week strike of sub-contracted workers in Barts Hospital forced management to bring them back ‘in house’ and with a 14% pay rise. Almost none of this is covered by the media. We need to spread the word, to help support and coordinate such disputes, and also have a political strategy for the long term.

A Haringey Council Cabinet Member welcomed the meeting and condemned Government policies which were causing horrific poverty in our communities.

A rep from the National Education Union agreed that June 18th was just a starting point for a major fightback. Teachers had seen a fall in real wages and there was a momentum building for strike action. This is not something any teacher takes lightly as they are committed to the welfare of their pupils. This was demonstrated throughout the pandemic in which teachers continued to teach in very difficult circumstances, and in fact helped address the welfare and extra needs of so many of their pupils for IT and food etc.

After these opening speeches everyone in the hall was invited to hold up ‘We back the RMT’ posters, to demonstrate the meeting’s support for the planned strikes on June 6th against staff cuts on the underground. This was widely tweeted.

There then followed further, shorter contributions from those in attendance:

A Haringey Unison Schools rep explained how their members were the non-teaching staff that kept schools functioning. Yet low pay meant many were forced to do 2 or 3 jobs to survive. The Union recently submitted a £2k across-the-board payrise claim. He called for a windfall tax on all millionaires, corporations, tax avoidance etc, and demanded that energy companies be brought back into common ownership as in the pre-Thatcher days.

A branch secretary of the GMB Union said that meetings and protests similar to this Haringey one were happening around London in the build up to the June 18th demonstration, and flagged up a planned anti-austerity rally outside Islington Town Hall on June 9th.

A rep from Haringey Stand Up To Racism called for workers of all backgrounds and nationalities to work together, to oppose racism and any divide and rule. The Government has brought in a number of new racist measures including the immigration act, wider police stop and search, and threats to further curtail rights to protest. We should all be inspired by the mass mobilisation on the streets which halted a recent immigration/deportation raid in Dalston, similar to one in Glasgow in 2021. Racism should be challenged at every opportunity.

A Labour Party member in Haringey was looking forward to a new cohort of workers taking industrial action for the first time. The party under Jeremy Corbyn had published manifestos which addressed real concerns and promised real progress, but the current leadership had cracked down on the left wing and abandoned many positive policies.

A member of the Socialist Party brought their solidarity to the meeting and called for socialist policies.

A Socialist Workers Party member said that Union leaders needed to be pushed by their membership. She called for mobilisation in workplaces, giving the example of 2 local bus garages. If the RMT and bus workers came out on strike together, even for a day, this would have a dramatic political effect. She also called for action against high rents which millions were now struggling to pay.

Other attendees brought up various points:
– Union membership in the UK was down to 25% of workers, and trades unionists had to strive to bring this back to the 50% levels of the past.
– Rishi Sunak’s one-off £15bn payout for energy bills was a con as the Government had just recently cut £20pw off benefits, and in any case the energy bills were due to rise even further in the autumn – a more than 100% increase overall. Yet in France the Government had capped energy bills rises to 4%.
– The inspirational grassroots poll tax campaign 30 years ago showed what can be achieved when communities come together to take action.

A member of the Public and Commercial Services union informed the meeting that members in Job Centres and related offices were angry about cuts to benefits and being forced to implement Universal Credit.

A rep from the Haringey Claimants Justice Campaign welcomed the meeting saying it was good to hear of real action bubbling up in workplaces and Unions. However, we need to involve families throughout our communities – to organise at the grassroots and use our power. The HCJC invited those present to pick up some of their leaflets, being distributed outside Job Centres etc, and get involved in promoting claimants rights and solidarity.

A member of Haringey Solidarity Group agreed, calling – in addition to workplace struggles – for community organising, residents associations and campaigns, opposition to evictions, the development of an active Claimants Union, the street level pandemic-related Mutual Aid groups to be revived and developed into local solidarity groups, and the building of long-term self-organisation and counter-power. Copies of HSG’s ‘Totally Indypendent’ newsletter was distributed to all present, including a flyer/invitation to attend the coming special HSG open meeting on 7th June to discuss ways of building community solidarity and opposing austerity.

Those who had made the initial speeches were given the opportunity to sum up and make some conclusions:
– We need to build a movement
– We should set up a delegate body of local organisations and produce a New Deal, Haringey Demands Better manifesto.
– Haringey often leads the way or contributes significantly in national campaigns (such as the Poll Tax, anti-cuts campaigning etc) and we should do the same again.
– The extreme right and fascism must continue to be countered.
– Any industrial action should be supported and coordinated

Report by Dave, a member of Haringey Solidarity Group

* Apologies for any inaccuracies or omissions in this report