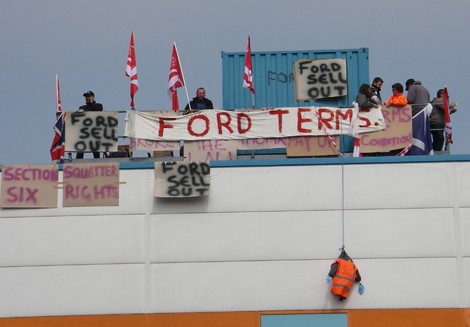 On Tuesday 31st March, the management of the Ford Visteon plant called a general assembly and told people that they would have to leave their workplace immediately. The workers were told to fetch their personal belongings the next day at 10am, but when they turned up the factory was already closed. Workers entered through an unlocked side entrance and about 70 workers – men and women from all kinds of backgrounds – occupied the plant.

Security guards prevented people from going inside, and they also blocked the fire exits with padlocks – clearly illegal. On Wednesday night, two bailiffs entered the plant. They issued an eviction order, supported by five cops. The eviction order was flawed: it was not signed and it had the wrong address on it. Workers expected a proper eviction order for Friday 3rd April.

The plant manufactured parts for various car companies, for example Land Rover, Jaguar, Mazda, Renault, and Ford. In 1991 there were still 1,100 people employed, this number came down to 250. Workers guess that Ford Southampton, the main ‘client’, piled up stock lasting several weeks. Ford Southampton had announced redundancies and will eventually shift production of the Transit to Turkey.

Spirits have been high and supporters have been bringing food. Initially police tried to prevent supporters getting close… but then gave up for the night. The occupying workers are aware of the other car parts factory occupations and the G20 protests… And the occupation is getting a lot of publicity.

Supporters welcome to visit. It’s on an industrial estate. Support demonstrations have been planned. Check the calendar and/or Indymedia London for details of future ones.

Directions: From Ponders End overground station, the plant is five minutes’ walk. Cross the footbridge, walk down main road towards central London, the next street to the left is Morson Road, with the factory situated at the end.

There is a working computer inside the factory, with limited access to the internet and a printer.  Solidarity messages can be sent to the workers inside the factory at their email address.  There is also an elist which has been set up to co-ordinate a support campaign.  If you would like to be added, please email HSG.

Making a donation: Haringey Solidarity Group is collecting donations to support the occupied workers.  Funds are need to support the families while the dispute continues and to buy equipment for the workers inside the factory (camp-beds, heaters…).  All the money that HSG collects will be passed directly on to the workers in the building.  If you would like to make a donation, make out a cheque to ‘Haringey Solidarity Group’ or ‘HSG’, enclose a note saying that it’s for the Visteon workers, and send it to HSG, PO Box 2474, London N8 0HW.

Update: On Thurs 9 April, the workers left the building with the promise of negotiations about their back pay, redundancy package and pensions.  The Ford Visteon Workers Support Group (Enfield), which had been set up, along with a (very busy) support group organising elist, continued to support the workers and their 24-hour blockade of the factory. The group met weekly until the workers agreed on a redundancy package and ceased picketing.  The Visteon Pensions Action Group continues the fight for their pensions.

For more information about the pension battle, and for an account of the role of the support group in the struggle, follow the links below.