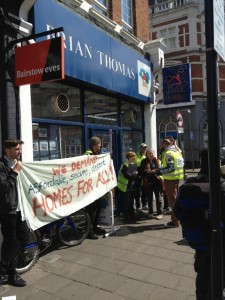 On Saturday 27th April 2013,as part of a London-wide day of action against Letting Agents, 20 Haringey Community Housing Inspectors went out to investigate the practices of local Letting Agents in Green Lanes, Haringey.

Other actions took place in other parts of London including in Islington/Hackney, Brixton and Herne Hill, see the Let Down campaign blog.

Haringey’s action was a follow-up inspection to one held six months ago – in October 2012, members of Haringey Housing Action Group became ‘Community Housing Inspectors’ and exposed the unwelcome practices these Letting Agents are engaged in: profiting and supporting landlords all to the detriment of the basic need of people to find an affordable, secure home.

Over 20,000 households in Haringey rent their homes from private landlords, and about half of these are claiming housing benefit.  The greedy and discriminatory practices of letting agents are a huge problem for Haringey as well as London as a whole. Our inspections showed how local Letting Agents were:

On Saturday 27th April we returned to carry out further inspections to find out if any of our demands for changes had occurred. We served Cease and Desist Orders on eight Letting Agents found to be engaging with one or more examples of the above greedy and anti-social practices: Wilkinson Byrne, Easy Properties Ltd, A1 Estates, Hane Estates, Kings Lettings, Winkworth, Bairstow Eve, and Brian Thomas.

Our inspections involved interviewing staff inside the various offices and then formally serving Cease and Desist orders on them. We informed the public of the anti-social practices and crimes being committed by the Letting Agents. Our inspectors cordoned off the entrances as a crime scene and gave out over 800 leaflets with our demands. There was great public support from passers by and cars honking their horns.

There were a range of responses:

There was not enough time to stop at every Letting Agents along Green Lanes, but we already had information that others, for example Paul Simon and Anthony Pepe, were basically no different from the ones above. We agreed to continue to monitor and visit all Letting Agents in the area.

The Cease and Desist order* gave notice to the above Letting Agents, as of Sat 27th April 2013, to cease and desist from committing any further anti-social behaviour** and/or crimes against tenants, including one or all of the following:

– Ensuring an unaffordable housing market
[In contravention of the Universal Declaration of Human Rights, Article 25]
It should be noted that until 1988 most private tenancies were secure / long term and rents were capped by law at affordable levels. In a recent report, one in five landlords had increased their rents because their letting agent had encouraged them to.  This was five times as many who had done so because of increased mortgage costs.

– Charging of fees/extortion
[In contravention of the Rent (Scotland Act), 1984 which should be extended to rest of UK]
Fees are categorised as extortion and outlawed in Scotland. Agency ‘fees’, reference checks’, admin ‘fees’, leaving ‘fees’ are all costs that have been created over the past few years by and for Letting Agents, to increase their profits and exploit the basic need of tenants to find a home

– Supporting mass tax avoidance by Landlords
[In contravention of Fraud Act 2006 – Sections 9 and 12]
1 million landlords – out of a total of 2.9m – were condemned in March 2013 by the Exaro invtestigative report for illegal tax avoidance costing HM Revenue and Customs around £550m per year.

The ‘Cease and Desist Order’ will only be revoked if the said Letting Agents put an end to the above practices.

* “A cease and desist order is an order or request to halt an activity (cease) and not to take it up again later (desist) or else face legal action. The recipient of the cease-and-desist may be an individual or an organisation.” [Wikipedia]
** The UK Crime and Disorder Act 1998 applies to someone who has ‘acted in an anti-social manner, that is to say, in a manner that caused or was likely to cause harassment, alarm or distress’ ie systematic distress to prospective tenants