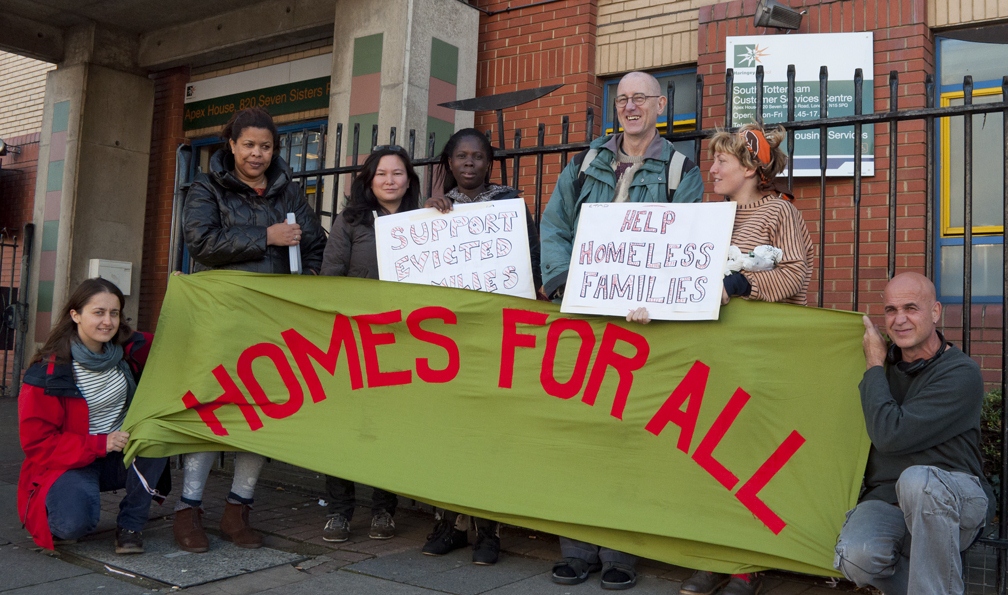 Ms T, a member of the group and mother of three, is pregnant and about to be evicted from a private tenancy later in the month, just three days before her baby is due to be born. Ms T had approached Haringey Council to apply for emergency housing at the beginning of summer, but was told on repeated occasions that she would not be housed until the hour of her eviction. The fact that she was pregnant was not reason enough to offer her accommodation earlier. So she would have to wait for bailiffs to throw her out, before turning up at the council office with all her belongings, only three days from her baby’s due date.

The government’s own guidance in this situation is that the council should consider a person homeless and not force them to wait for their eviction date before they agree to house them.

Ms T had also asked Hackney Community Law Centre to write a letter to support her.  But, with no word from the council as to whether her case was being processed, Ms T and approximately 10 members of Haringey Housing Action Group arrived at the council’s Customer Service Centre at Apex House with banners, placards and leaflets, demanding that she be housed as a matter of emergency.

The banners were removed only when a member of the temporary accommodation team agreed to speak to Ms T. The result being that she received the keys to a house in Edmonton on the same day. The council claimed that Ms T had been sent a letter offering her an appointment for 3pm that day, but that it had been sent to the wrong address, despite having her correct address on the system.

Whether or not there was an administrative error, this does not alter the fact that the council had made it clear to Ms T that there would be no chance of her being housed before her eviction date.  We showed that collective action can convince the council that they were wrong.  We also had lots of support from other people in the customer service centre, and even one or two encouraging remarks from staff.

Everyone deserves decent, affordable and secure housing that is suitable for their needs.  If you want to take action to fight for more and better housing, you can either get involved with a housing action group in your area (if there is one) or Haringey Housing Action Group can give you advice on how to start one.